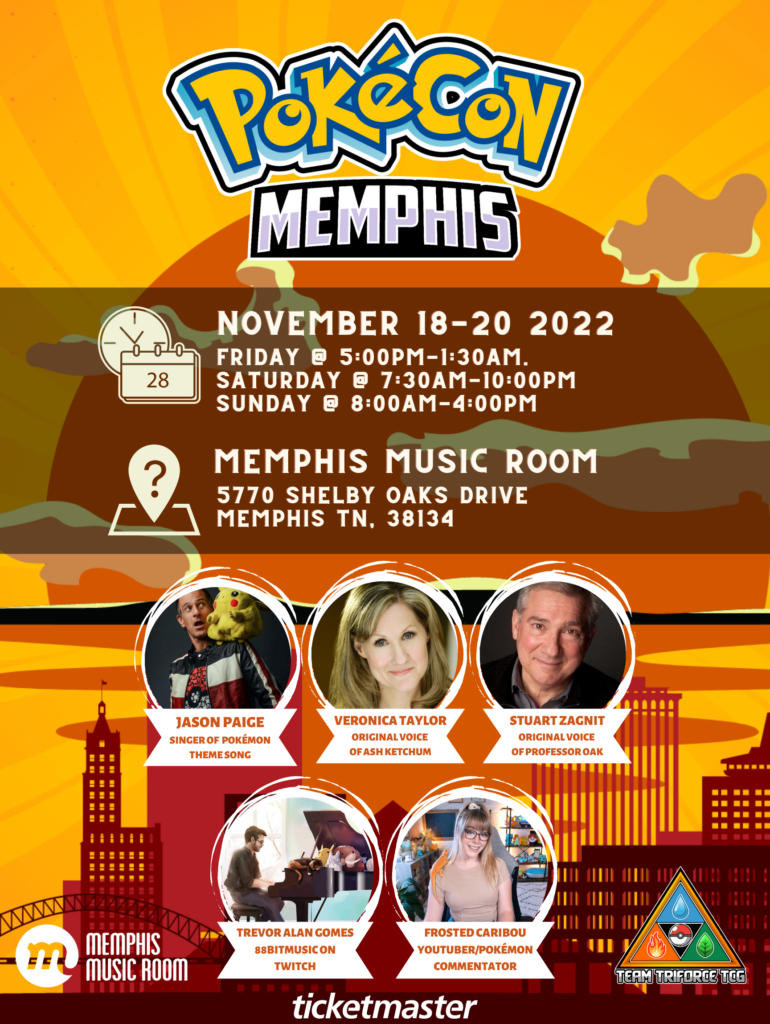 Pokécon Memphis is the largest Pokémon-themed convention in the South. Fans of the anime, card game, or video games, will find many activities to enjoy. TCG tournaments, live performances, box breaks, and more are all happening at the Memphis Music Room.

Pokécon Memphis features special performances by Jason Paige (the singer of the original Pokémon Theme Song) and 88bitmusic’s Trevor Alan Gomes. DJ Stringbean and DJ Dett will be on the turntables for a PokéMIX dance party on Friday. Original cast members of the show Veronica Taylor (voice of Ash Ketchum) and Stuart Zagnit (voice of Professor Oak) will be present. Team Triforce TCG’s Wes Upchurch is set to break a new Pokémon Guinness World Record. Popular Pokémon Commentator Frosted Caribou will be livestreaming select matches from the Main Event. New players can build their first deck, learn the game, and battle each other in friendly competition, or win prizes in our side events or game shows.

Find out more and get all the information you need to know, including how to get involved with the competition, the full event schedule, the entertainment lineup, vendor details, special guests information, and more on the official website by clicking this link :
https://pokeconmemphis.com/
All Ages Event
Date: Friday, November, 18, 2022
Through: Sunday, November, 20, 2022
Event Time: 05:00 PM

Jason Paige is an American singer, writer, record producer and actor best known for singing the first theme song for the English version of the Pokémon television series.

As a vocalist Jason toured for a year as the lead singer for legendary band Blood Sweat & Tears. He shared the stage with Michael Jackson as the rap soloist for the hit song “Black or White” in Michael Jacksons 30th Anniversary concert at Madison Square Garden aired on CBS. He can be heard on Foreigner’s “Cant Slow Down”, Meatloaf’s “Bat Outta Hell 3”, The Scorpions “Hour 1”, Frankie Valli’s “Romancing the 60’s” and on “The Art of McCartney” tribute CD behind Billy Joel, Roger Daltrey, Kiss and Smokey Robinson among others. His voice is featured in “Rick And Morty”, “Phinaes & Ferb”, “Sponge Out of Water”, “The Jersey Boys”, “Annie” with Kermit and Miss Piggy in the last “Muppet Movie” and a salad of singing food characters in “Sausage Party”. He has sang and beat-boxed with Aerosmith on tour and on the Howard Stern re-mix of the hit single “Pink” and has performed with Enrique Iglesias on tour, television and can be heard on his CD “7”.

As the featured soloist Jason has toured the world with Tommy Tallarico’s legendary Video Games Live. He sang backing vocals on tour for Oleta Adams, performed with Liza Minelli in “Liza’s Back” at Town Hall, with Ashanti at the Grammy’s and in many concerts with superstar icon Billy Porter. He’s also sung bg’s for Ray Charles, Luther Vandross, Mark Anthony, Ricky Martin, Usher, Chaka Khan and Patti LaBelle.

Jason sings dozens of jingles every year. Recognizable highlights include Coke’s “Catch the Feeling”, Pepto Bizmol’s “Nausea Heartburn Indigestion” , Mountain Dew’s “Bohemian Rhapsody”, Taco Bells “Think Outside The Bun”, Subway’s “Eat Fresh”, Bounty’s “Quilted Quicker Picker-Upper” and of course the OG theme to the cartoon phenomenon “Pokemon” which was a Billboard #1 single played by millions on Guitar Hero and scored what was at the time the # 1 most viewed / imitated video of all time on YouTube.

Jason Paige has quickly risen again to the spotlight of the Pokémon Fans. 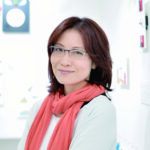 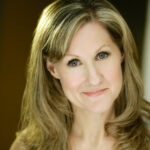 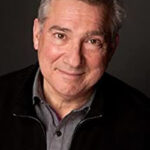